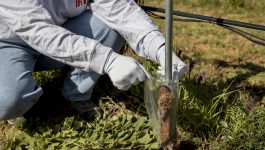 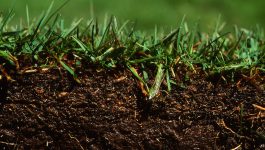 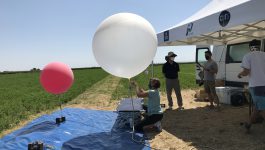 IRTA is studying the potential of Mediterranean crops, such as grapevines, rice and olives, to fix atmospheric carbon into soil and woody structures

The more carbon soil contains, the more fertile it will be, helping to guarantee food security for a population expected to number 10 billion by the year 2050

Like all other economic activities, agriculture generates greenhouse gas emissions. In Catalonia, it has a lower volume of emissions than the energy, transport and industrial sectors. At the same time, agriculture is a victim of climate change, as it suffers the consequences of weather events such as drought, flooding and frost, which are set to become increasingly frequent and severe. What is often overlooked is that, thanks to the capacity of soil and crops to fix and absorb carbon, agriculture can play a crucial role in mitigating global warming.

Through photosynthesis, plants constantly absorb the carbon dioxide (CO2) generated by human activity. Biomass is produced as a result; when plants die and decompose, the living organisms in soil, including bacteria, fungi and earthworms, turn them into organic matter, a carbon-rich material that keeps water and nutrients such as phosphorus and nitrogen in the soil. Catalonia’s agricultural soils, which cover 33% of its surface area, are estimated to contain as much carbon as the territory emits in a four-year period. While significant, the amount in question could be even greater if farming practices were to adopt carbon fixation and greenhouse gas mitigation strategies.

As highlighted by the “4 per 1000” initiative, launched by France at COP21, a yearly increase of 0.4% (i.e. 4‰) in organic carbon stocks in the world’s agricultural and forest soils would exceed the annual rate of growth in CO2 emissions. With that in mind, the Institute of Agrifood Research and Technology (IRTA), which reports to the Government of Catalonia’s Ministry for Climate Action, Food and Rural Matters (DACC), is leading and coordinating various projects to determine what types of crops and what farming practices optimize carbon sequestration in soil and in tree crops’ woody structures.

“All crops absorb carbon during the day through photosynthesis, and release a smaller amount at night,” explains Robert Savé, an emeritus researcher from IRTA’s Fruit Farming programme and one of the creators of the map of the organic carbon stocks in Catalonia’s agricultural soils. “Woody crops, such as grapevines and olive trees, store the most carbon, as they live longer than arable crops, such as cereals,” he continues. “It has been calculated that olive trees capture three times more carbon than an Aleppo pine forest, for example.” Savé notes that there are also differences between soil types: soil below dryland crops stores more carbon than irrigated soil, the water in which is conducive to microorganism activity and, as a result, to the decomposition of organic matter, some of which is turned into CO2 that is released into the atmosphere.

A guide to best practices

The capacity of soils and crops to absorb and sequester carbon can be enhanced depending on how they are managed. The CARBOCERT Guide to Best Farming Practices, which IRTA helped to write, brings together the best practices available for quantifying and improving carbon sequestration in agricultural soils and woody structures in the case of Spain’s six most representative crops: olives, almonds, wheat, citruses, grapevines and rice. The best practices in question include incorporating crop or pruning litter into soil, minimizing tilling, and even not tilling at all. As the guide states, it is estimated that incorporating pruning litter into soil can increase the organic carbon content of its surface layers by 60%.

“These practices result in part of the carbon synthesized during cultivation being reincorporated into agrosystems, and also slow the decomposition of organic matter, which prevents carbon being returned to the atmosphere,” explains Maite Martínez-Eixarch, a researcher from IRTA’s Marine and Inland Waters programme and one of the guide’s authors.

It is vital that agriculture be actively involved in the fight against climate change, and the wine production sector is among those taking the lead in that respect. IRTA is currently working on various initiatives with wineries, whose decision-making it guides to enable them to take full advantage of soil moisture. The Institute has years of experience in projects involving vineyards and climate change; a good example is VITIMPACT: Contribution to environmental assessment of viticulture, a project carried out with the University of Lleida (UdL). VITIMPACT “has provided information useful for furthering knowledge of how soil, water availability, fertilization and soil microbiota biodiversity influence direct greenhouse gas emissions in grapevine cultivation in Mediterranean dryland conditions,” says Felicidad de Herralde, a researcher from IRTA’s Fruit Farming programme and one of the people behind the project.

Increased capacity for carbon fixation makes soil more fertile, more resilient and, consequently, more productive, contributing to food provision in a world experiencing exponential growth: the planet’s population is expected to reach 10 billion by 2050, entailing an increase of up to 60% in demand for food. That is set to happen against a backdrop of environmental conditions that, according to MAR1, the first report on climate change in the Mediterranean Basin written by the network of Mediterranean Experts on Climate and Environmental Change (MedECC), will reduce agricultural productivity throughout the Mediterranean region by 17% on average. Providing quality, safe, affordable food and mitigating global warming are the two major challenges facing agriculture. Those challenges are included in Goal 2 (Zero Hunger) and Goal 13 (Climate Action) of the United Nations Sustainable Development Goals, where it is emphasized that agricultural soils are an ally in our efforts to achieve food security and tackle climate change.